Sweet-scented berry fruits with underlying oak-derived elements of toast and smoke characterise the aroma of The King’s Wrath Pinot Noir. The use of stems in fermentation give the wine a subtle perfumed forest floor and spice character. The richly-dense palate is built on layers of blackboy peach and red currants while a fine tannin structure contributes to tightness and length, as well as retaining freshness due to bright Marlborough acidity.

Highly versatile, this wine matches well to most dark meats, mushrooms as well as rich fish such as tuna or trout. We recommend enjoying The King’s Wrath 2017 with a confit duck leg served with wild mushroom risotto and smoked goats cheese.

In 1242 William de Marisco was implicated in an assassination attempt on King Henry the Third. Found guilty of high treason, William and 16 of his associates were sentenced to death.  It is said that the King was so displeased with William, he even requested a special punishment be devised – that of ‘quartering’. Following his execution, the four parts of William’s body were sent to the four corners of the Kingdom – as an example of what would happen to those incurring the full vehemence of the King’s Wrath.

There are no reviews yet. 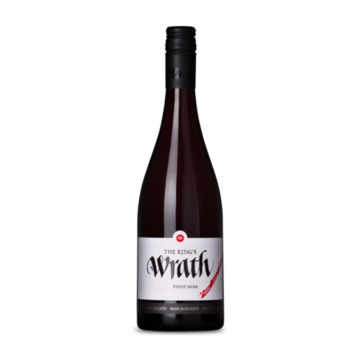 Hi there, please confirm your age before shopping with us:
Where a wine vintage is not available, another vintage may be substituted. If you really care about vintage, It is important you to contact us before we send wines.